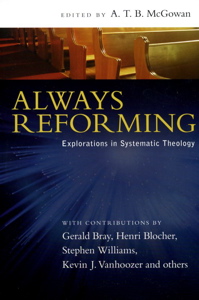 This is a book I hope to purchase soon. I recommend that anyone interested in Reformational thought and history consider purchasing it for their reading pleasure.

You canÂ read the table of contents, the preface, and the introduction online.

Publisher Description: The Reformed churches of the sixteenth century affirmed the need to be semper reformandaâ€”always reforming.

But in the ensuing centuries, some have taken this conviction as a mandate to abandon the departure from received orthodoxy, while others have progressed toward a rigid confessionalism that cements the Reformation itself as a final codification of truth.

Between these extremes is the ongoing need of the church to be always reformingâ€”subjecting its beliefs and practices to the renewed scrutiny of Holy Scripture and restating the truth of Scriptures in ways that faithfully communicate the gospel, advance the mission of the church and empower the people of God.

This collection of essays by senior theologians and edited by A. T. B. McGowan practices what it preaches, mining the whole terrain of systematic theology to refresh, renew and yes, even reform the church for its next season.

I always want to have clear and accurateÂ information. ThankfullyÂ Matt PayneÂ posted a comment on my previous entry….

He attended the conference that Mark Driscoll’s video was sent to andÂ afterwards was able to get a copy of the video along withÂ many other people who wanted it.

I trust that Mark’s story was sincere, but I’m not quite sure that everything Mark said about the eventÂ is accurate.

Also, Matt, could you please further elaborate on the things that Bill Hybels said about the video and why he didn’t like it?

Correction: Please seeÂ the post after thisÂ post, along with its comments, for a clearer picture of whatÂ took place at this church planters conference regarding the Mark Driscoll video. I honestly do not want to say anything else about Mark because I trust he was sincere in his post. But after the diligence of some who wereÂ involvedÂ with the conference, I believe that my original post is no longer accurate or proper. I hope that the record can be set straight on this issue. Thanks again for all the comments.

Well, it’s official, Bill Hybelsjust made a very stupid decision. I will not comment about any other things regarding Dr. Hybels since I do not know much about him, but I will comment about something I know he did that was wrong.

Mark Driscoll has just made it known, this weekend, what happened with the 8 minutes video he was asked to make for a church planting conference in Florida. Some 5,000 copies were sent to the conference for distribution to all attendees. Unfortunately, Bill Hybels did not like the video when it was shown and (the video having been well received by the audience) proceeded to castigate the video for its lack of recognition… of WOMEN church planters! After this, the organization hosting the conference decided not to hand out any of the videos.

Therefore, at the bottom of this post, you will find the video that Mark posted on YouTube for everyone to see since none of the copies were allowed to be distributed. You can read about this story from the horses mouth.

By the way, I really loved the video and I fully believe that Mark Driscoll said what those church planters needed to hear. I can only hope that God will teach Bill Hybels a lesson for his egalitarian non-sense and blaspheming of God’s written word. Titus 2:4-5: “train the young women to love their husbands and children, to be self-controlled, pure, working at home, kind, and submissive to their own husbands, that the word of God may not be reviled.”

A pastor friend of mine from Memphis, TN, has launched a weblog. His name is James Grant and his blog is called In Light of the Gospel. He’s got a lot of great things to sayÂ about the GospelÂ and I believe that he will be a valuable asset to the larger Christian world. So, bookmark his site and come back often to read the things he writes!

May the Lord bless your ministry James!

Â In Christ and In Defense of the Faith,