Well folks, it’s almost here! Thankfully JT over at Between Two Worlds is giving us some shadows and types of the book about to be released in the near future by Dr. John Piper. The first blurb is a commendation by the well known Dr. Darrell Bock:

A good biblical dialogue needs two good conversation partners, who work hard to understand each other and make their case biblically. Piper’s look at justification does this with a superb tone and a careful presentation of his case. He and Wright exchanged communication before this book went public. Piper appeals to the wisdom of the ages on justification, a wisdom deeply rooted in Scripture. Wright argues his approach is also deeply rooted in Scripture as seen through a fresh appreciation of the first century context of Paul’s writing, a context we too often underestimate. This dialogue is important for the church; Piper has put us in a position to hear both sides of the debate and understand what is at stake. He has served us all well by enabling the reader to be put in the place of considering what Scripture says as he or she listens to this conversation and to our God. Iron sharpens iron, and Scripture is a sword that cuts between the soul and Spirit. Be prepared to be sharpened by a careful dialogue about what justification is.

This book is going to be well worth buying as soon as it comes out, whether you are on one side of the New Perspective debate or the other. As Dr. Bock tells us… iron really does sharpen iron!

It is my hope and prayer that any mysteries will be dispelled in regards to the views of N. T. Wright as well as clear concerns stated by John Piper about where the New Perspective, embraced too strongly, can lead people.

I still do not know what the book will ultimately conclude, but I trust that (from past experience) John Piper will have done his best to do justice to the views of N. T. Wright. May God get all the glory and may this book help many, many people to understand the Bible even more than they did before having picked it up!

Today’s ON FAITH question is an excellent one…

What’s more important from a faith perspective? Being saved? Or doing good works?

I would like to point out Bishop N.T. Wright’s response to the question. It is an excellent answer as well as another verification that he is in fact a very orthodox Theologian. I hope you enjoy the article. I have re-posted it on this blog entry below:

END_OF_DOCUMENT_TOKEN_TO_BE_REPLACED

The Sufficiency of Christ’s Obedience in His Life and Death

John Piper has give us some excellent thoughts on Christ’s obedience as it relates to Jesus’ whole life.

Piper says, “It is more likely that when Paul spoke of Jesusâ€™ obedience as the cause of our justification he meant not merely the final acts of obedience on the cross, but rather the cross as the climax of his obedient life. . . . Thus when Paul compares the â€œone trespassâ€ of Adam to Christâ€™s â€œone act of righteousnessâ€ (Romans 5:18), there is no single act in Christâ€™s life that corresponds to the eating of the forbidden fruit. Rather, his whole life of obedience was necessary so that he would not be a second failing Adam. One single sin would have put him in the category of a failing Adam. But it took one entire life of obedience to be a successful second Adam. That this complete life of obedience came to climax in the freely embraced death of Christ made such an overwhelming impression on his followers that they looked upon the â€œcrossâ€ or the â€œdeathâ€ as the climax and sum of his obedience, but not separate from his cross-pursuing life.”

After reading this, I wonder if Piper’s thoughts might go well with James Jordan’s understand that Christ became the first mature man in history and attained to the glory that God had originally intended for Adam in the Garden. Jordan points out that, “He [Jesus] matured in faith, beyond the point where Adam failed. He matured to the point of being ready for adult responsibilities. Through his death, he became fully mature and was given dominion over ALL nations, over the wider world into which Adam had been prematurely cast.”

In other words, Jesus’ whole life of obedience was required for Jesus to reach full maturity to be ready for death on the cross, thus receiving the resurrection and being given dominion over all of creation.

Hebrews 5:9 says, â€œAnd being made perfect, he became the source of eternal salvation to all who obey him.â€

It seems very probable that John Piper and James Jordan could meld their views together for an excellent understanding of Christ’s obedience and maturity being credited to us by faith. But I’m sure I’m just dreaming! 😉

For more information on Adam and the Garden, along with a good analysis of James Jordan’s views, see this article. 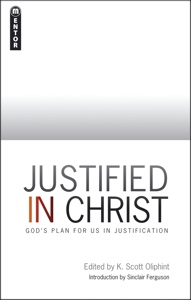 Westminster Bookstore is the first book seller in the US to offer this great new book! Check outÂ the books web site over atÂ WTS Books and see all the cool features.Â

They have an exclusive “Ask the Authors” discussion setup for those of you who purchase the book and have specific questions. Enjoy! This is the book I am currently reading: Justification in Perspective: Historical Developments and Contemporary Challenges

Here is what one reviewer said:

“As the doctrinal fountainhead of the Reformation and subsequent Protestant tradition, any innovation concerning justification tends to spark explosive discussion. All too frequently, these incendiary debates favor collateral damage over precision strikes. Alternatively, serious debate across lines of disagreement has often spurred past theological leaders to further, careful reflection and insight. Justification in Perspective is an excellent example of this latter sort of constructive theological dialogue. Each contributor comes from one of Reformed Protestantism’s many strands and examines justification within a particular period or theologian from the early church and Augustine through the Reformers to modern developments in Barth and the New Perspective.”

So far, the book has been an excellent read. Their interaction is honest and humble in seeking to understand and explain the history of the debate. If you want to look at much of the past and current debates and viewpoints regarding the doctrine of Justification, thenÂ this is the book for you.

As an example of what I’ve read, I found the chapterÂ about the Council of Trent extremely eye opening and helpful.

Here is a breakdown of the chapters:

PART 1: The Protestant Doctrine of Justification: The Heart of Protestant Preaching

PART 2: The Protestant Doctrine of Justification: Its Antecedents and Historical Development

PART 3: The Protestant Doctrine of Justification: Continuities and Discontinuities in Current Challenges to the Traditional View

8. Justitia Aliena: Karl Barth in Conversation with the Evangelical Doctrine of Imputed Righteousness (Bruce L. McCormack)
9. The Lutheran-Catholic Declaration on Justification (Henri A. Blocher)
10. The Doctrine of Justification in Paul and Beyond: Some Proposals (Simon Gathercole)
11. New Perspectives on Paul (N.T. Wright)